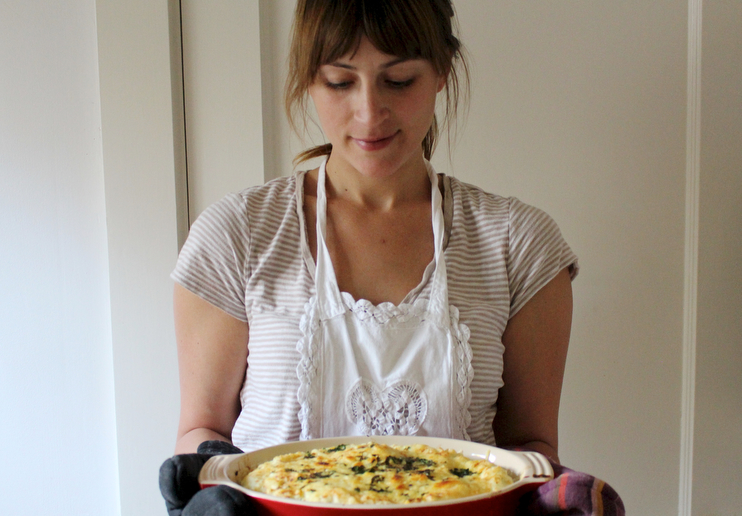 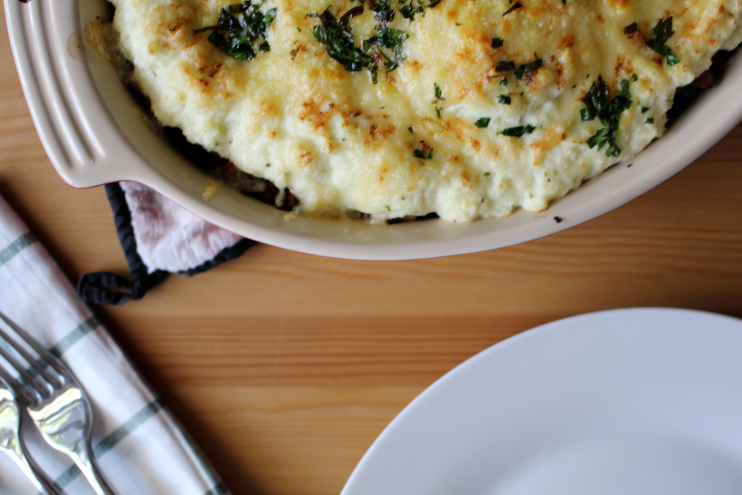 What a pleasant few weeks this has been.  After about a month or so of hosting we have had a solid string of days just to ourselves to rest and nest and really savor autumn.  We badly needed a reprieve from all things social and just time as a family to be together, doing things that ground us and makes thing flow smoothly, like family suppers and books before bedtime.  With all this time on my hands, I’ve been cooking up a storm and tried my hand at some new recipes.  During Sunday meal planning awhile back I came across a recipe for shepherd’s pie and it looked so tasty.  Since we are trying to eat a little healthier, I decided to use gruyere cauliflower puree in lieu of mashed potatoes and it was a worthy substitution.  Everyone licked their plates and I have since added this to my arsenal of healthy go-to meals.  One could easily make this vegetarian by substituting the meat for lentils or other legumes, which I think would turn out really well.  And on a side note, we had been having a difficult time getting Theodore to sit still during meals and to want to eat everyone else was having for supper.  Unlike Stella who eats everything and anything, he became very attached to his bottle after I stopped nursing him, thereby making meal time sometimes stressful.  We decided to push through and not make him a separate meal, although sometimes that seemed like the far better option when we were at our wits end and pleading with him to fill his belly with something other than milk.  But the last three or so weeks have proven that our hard work is paying off.  He has been sitting with us for supper like he always has, but this time is trying everything on his plate, requesting more, and even handing me his dirty dishes at the sink when he’s done.  Even Stella will now say, “Look mama, he’s eating everything now like me!”  What’s helping?  I think a combination of things.  Sneaking veggies in foods he likes, having him help Stella and I when preparing our meals by doing simple things like stirring and throwing scraps in the compost.  But mostly, pure diligence.  In the past he would pick at his food and requested his “ba ba” almost incessantly.  So we’ve kept snacking to a minimum and have tried to make supper fairly consistent by eating at the table roughly at the same time each evening as to build it into our routine.  Our Theodore now joins in and it is really wonderful.  For those who are struggling with picky eaters, keep on keepin’ on!  Stay consistent!  You got this!  Onto the recipe which, by the way, makes around four portions.  Just double it if serving to a larger crowd.

For the Savory Pie Filling:

To prepare the pie filling, saute the onions, carrots, mushrooms and garlic in olive oil until soft and caramelized, starting with the onions and ending with the garlic. Make sure to season with salt and pepper as you go.  When veggies are done, deglaze your pot with red wine and add tomato paste, cooking for a few more minutes to cook off the alcohol.  Take off the burner and add peas and corn, and transfer filling to a big bowl and mixing well.  Add your grounded meat and brown in the same pot you used to cook your veggies.  You can do this step first, just make sure to drain the oil and discard before proceeding.  Chop and add your fresh herbs to the meat once it is done browning and cook it for a few seconds, releasing the aromatics.  Mix the meat and vegetables together and put into a baking dish.   Preheat the oven to 375.

To make the cauliflower topping, start by chopping up the florets and boiling them until tender.  When done, strain them and add everything along with the cauliflower into a food processor.  Pulse until smooth.  You can always improvise here and add any cheese of your choice.  We happened to have gruyere on hand so I threw in a cupful of that.  I think parmesan would fair nicely.  Smooth the puree over your meat and vegetable mixture in your baking dish, top with additional cheese and parsley.  Bake at 375 until the cheese melts, so for about twenty or thirty minutes.  You can broil the top to make the cheese extra yummy if you have a broiler on your oven.  I recommend doing so because burnt cheese, oh yes.

Here are a few other meals we’ve been loving for some inspiration:

Back to School Lunch Inspiration with Black Forest

« A Little Film of Us as FiveStoring & Managing Toys »

show hide 7 comments
Link to this Post
email a friend