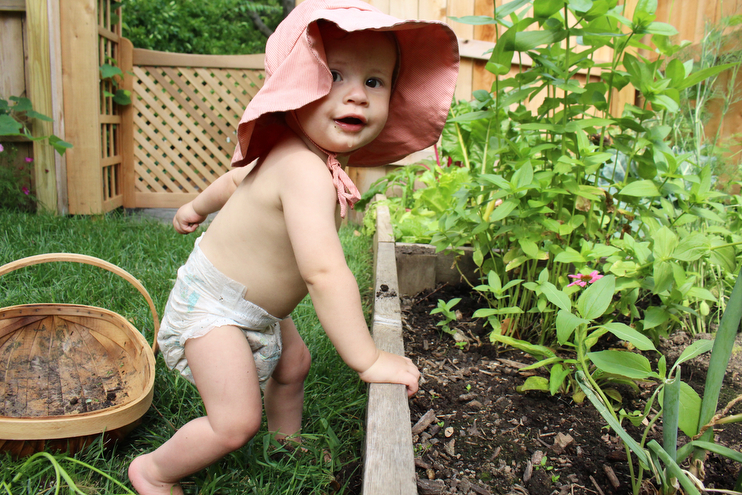 Last night Andrew and I sat on our front porch and rocked for a few hours after the kids went to bed. Theo was still awake in his room throwing toy cars at the door in protest, but he eventually gave in crawled under his covers and the banging stopped. As we sat, our toes tapped the bricks, pushing us back and forth in a gentle sway as we sipped our wine. Looking up and through old the trees weaving overhead, we noticed the summer sky slowly change from a murky white to warm and almost glowing shade of pink. It felt as though we were picked up mid-rock and magically transported to the set of a Woody Allen film set sometime in the 20’s or 30’s. It was beautiful. We waved to hello to neighbors passing by, and talked about the kids, mostly. We chatted about mom and dad things and doted on our little boy, who today is one year old. We revisited the day that our Alfie Francis was brought into the world and about how far we’ve come as a family since then.

To be honest, it doesn’t feel like too long ago when I was in a tailspin, unsure of what to do for myself or our kids as my life was in the grips of an ugly illness. As Andrew and I rocked, we talked about how life-saving it was that I sought treatment during that difficult time, something I continue to do each day even though Alf is twelve months. We talked about our three, our goals, and our hopes. We talked about how we were going to give thanks for today, to celebrate our boy and our family and these three hundred and sixty five days as five. We both decided, first birthdays with all their glory are much more than singing a cheery song and blowing out that first candle. Yes, those things are special and lovely and important, but more so we feel that the celebration is about lifting up and honoring where we are one year ago and what it took to get here today as a famiy celebratingall those memories and mountains that have taken hold of us and have molded a new, grace-filled shape for our family of five.

Some say the first year is the hardest. Some say “hard” hits somewhere around year three. Some say year thirteen. I say it’s all hard. Each year, each day, just in a different way. Parenting is tedious, repetitive and very emotional, no matter the age or number of children you have. Having one or three or ten all lives under the umbrella of “hard,” and boy does it ever require a lot of patience. It’s a job that rarely says, “thank you” with words nor does it give you a break when you need it most. If fact, it is often during those challenging and unrelenting times that it requires the opposite of you and commands you as mom or dad to step up and wade through whatever it is that given day or week or season. It’s the job that wakes you up in the middle of the night and throws up on you too many times to count. It’s the job that makes trips to the grocery store with kids one of the more trying things you’ll ever do and a trip to the grocery store without kids like a vacation. But, and this is a big ol’ BUT, it’s also most beautiful and fulfilling jobs there is, and that right there is enough to wash away all the tantrums and forgone naps and permanent marker blunders. I think being a mother is the most rewarding and life-giving calling out there, and I feel so ridiculously blessed to be able to say that mothering the babies I made with my husband and best friend is what I get to do each day. I get to do this and I love it. I am proud of many, many things in my life, but nothing holds a candle to being a wife and mother. Nothing comes close to touching it.

Yes, because I adore my family. But also because this role I have and hat I wear is work. I know this and recognize it each day because it’s hard work. Because I chose this path, I wanted this path, and choosing each day is an act of devotion and relentlessness, one that echoes a forever kind of love. Nothing comes close to motherhood, because each day as the sun rises you have to get up and make a thousand decisions that affect not only yourself in this world of a million doubts and concerns but also the lives of little humans that fully depend on you for safety, nourishment, guidance and care. Parenthood, it’s full of joys and little treasures and hundreds of “ah-ha!” moments, but on the other side of that coin, being a mother or father pushes you when you don’t want to be pushed and ultimately reveals more about yourself than I’d say most probably care to know. I think that is why being a mother is the best, hardest job there is. And that’s why we are not only celebrating our Alfie today, but also this past year and all the growth and connectivity and emotional attunement that I as his mother and Andrew as his father have gone through as we have been the steady anchor for our children each and every day of their lives.

Sometimes I think about those dark days last fall and how much I missed out on. Sometimes I’ll scroll through my phone and look at photos on Instagram during that time, so thankful I was able to capture some of good stuff and uncover joy amidst all the muck. There was a lot of muck. Sometimes I am hard on myself and am mad that my body and mind did this to me. Did this to our family for months. I think about what I could have done differently and what I should do in the future if we decide to ever have another baby. That burden frightens me truth be told. Then other times, times like now, I think about how much of a better mother and wife and overall person I am because of what I went through. How I have learned through heartache and hard work that sometimes our best intentions don’t always produce what we envisioned or had planned and that is the beauty of life. I never planned on having to go on medicine, I never planned on having to check and recheck my emotional state and how that interplayed with being home with three very dependent kids each day. I never planned on any of the baggage or postpartum stresses that would continue to surface week to week even though my baby is one and I am months past feeling as low as I did.

But then, like the surprise zinnias I found the other day that somehow seeded themselves in my garden unbeknownst to me, I never planned on being able to feed our baby with my body for a whole year. Surprise! I was hopeful we’d make it to month three. I never planned on Alfie, our third, to be so mellow and easy (so to speak) and full of joy. Surprise! I sort of thought he’d be the rebel babe who boycotted sleep and threw us for a loop. I never planned on feeling this connected to my family. Surprise! One year ago I thought I was as connected as I could be. Turns out there’s always room for growth and connection. Planned or unplanned, life is full of beautiful surprises like this and it’s these wonders that make this job the beauty that it is.

So today, on Alfie’s first birthday I propose a toast! A toast to Alfie Francis, our one year old. A toast to a healthy, happy little boy who makes us smile so much our cheeks hurt. To a little boy who makes us melt with that little head shake he does when he’s getting into something he’s not supposed to. Who is a heartbreaker with his big tooth gap and head full of tiny curls. To Alf, who is a daily reminder to me, that I am strong and resilient and a fighter for all that I love, and to know that is important. A toast to him for telling me without words or terms of endearment but only those soulful black eyes who look into mine that despite all my shortcomings and trials this past year, I’ve done alright as his mother.

show hide 16 comments
Link to this Post
email a friend