Life With Three and a Celebration of Myself 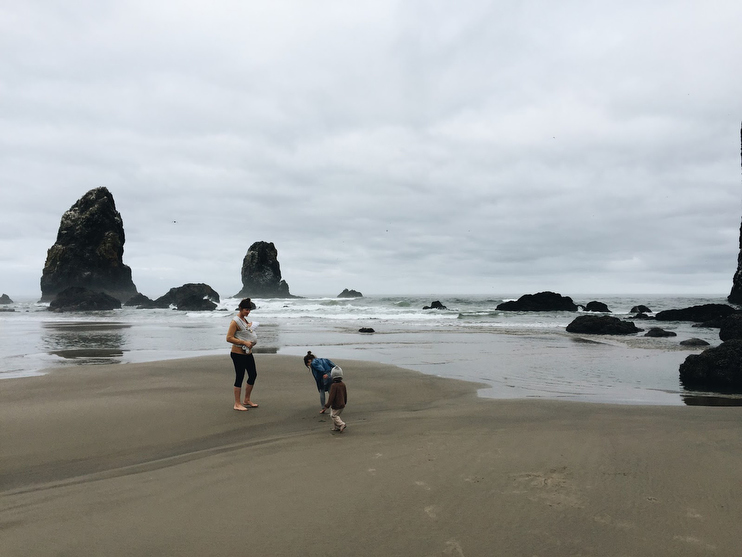 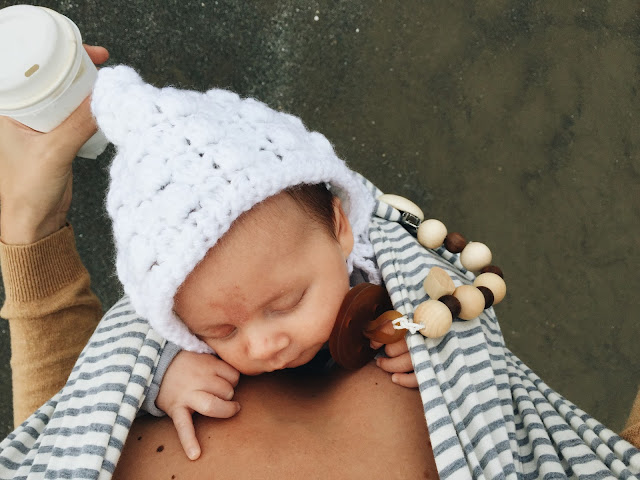 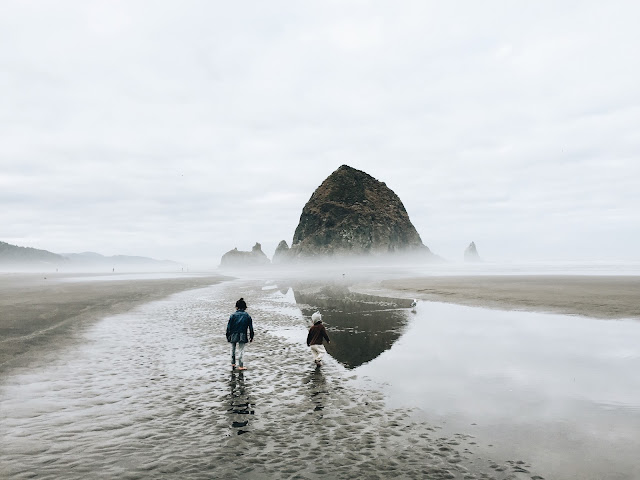 We’ve just returned from a trip to the Oregon coast for a bit of summer fun and to Iowa where we got to spend time with family.  As far as vacations with little ones go, it was everything we’d hoped for and more.  Our days were long and beautiful and adventurous there was lots of messes made.  Like that time Theodore found my lip stain before the sun came up and colored his little heart out all over his face and our room and my things.  That was fun.  But seriously.  On top of all the craziness and nights spent awake nursing or keeping toddlers from falling off beds, topping it all by miles and miles, were our very full hearts as parents.  Hearts bursting with happiness from all we got to see and do together as a family, and that’s the darn truth.  We are back home in Kansas City with September here and preschool having just started.  The five of us are finally settling into a routine of sorts and it feels really good to have our days strung together with simple joys and comforting rhythms.

It’s morning time and I’ve got my favorite yellow legal pad full of little square boxes to my left sitting atop our white tablecloth, a real to-do list maker this former teacher is.  There’s a sleepy baby with warm milk still wet on his upper lip to my right, having just spent the last hour or so on my breast, half eating, half sleeping and relishing the warmth of my body.  Stella is running around the soggy yard in her Elsa Halloween costume singing an ear-piercing rendition of “Let it Go” and Theodore quietly taking his favorite little toy car over and under and around everything in his path, ever so gently.

Strong chicory coffee with heavy coffee cream and bright green juice have both been drank quickly and I am contemplating another cup of each to get me through the afternoon.  It’s friday.  I am tired.  Very. Tired.  But this no surprise from you I am sure, as it is to be expected of a mama who wakes every three hours or so to feed her hungry bub throughout the darkness of the night.  I could use a long shower to shave my legs and keep thinking about my yellow yoga mat to stretch out on, but that will come after lunch.  The house is pretty tidy and ready for the weekend which feels nice since my parents are visiting while Andrew is away, and like every morning, our daily load of laundry is downstairs spinning.  Tonight’s supper is simmering away on the back burner, and the house smells like a yummy roast.  Sometimes I’ll just throw things found in the fridge with a big hunk of meat into my big cast iron pot and let them simmer away for hours.  More often than not what turns out is really quite tasty.  I’ve found you can’t quite mess up a roast, unless of course you roast the heck out of it.  And if you happen to do so, there’s  always ketchup.  It’s really starting to feel like fall here in the Midwest and in fact leaves have already turned on our walnut tree out front.  We’ve got the windows thrown open and the porch doors swung back, letting a gentle breeze make its way from one end of our home to the other.  Such is our day thus far.  It has been good to us.

I’ve been meaning to write about how motherhood has been with three little ones, but each time I get settled into a comfy writing position, it’s time to nurse or change a diaper or make a meal.  At such times, the computer gets closed and pushed under the covers or behinds stacks of paper so I can do what I do best and love on and take care of my babies.  It has taken me two whole months to get my thoughts out but here you have it.  Life with three.  So how is you ask?  Are we surviving?  How’s the chaos?  What’s it like in our home nowadays? Is it just crazy loud?  To those who ask such questions, my reply is always the same.

It’s just so good. And also, so very hard.

Can it be both?  Is it okay to say that it is both to those who are probably just asking to be polite?  Can a mother or father simultaneously be swallowed up with pure joy and be still be struggling, and I mean really struggling to find their way?  Oh, absolutely.  A rehearsed and flaccid, “It’s great,” just doesn’t cut it. I have found, especially true this time around with three little ones under four, that riding those parallel train tracks IS parenthood.  It is a steady, rhythmic beat that sways and rocks to the tune of not one, but two competing melodies, one sweet and lovely and bright, the other chaotic and loud and sometimes full of dark doubting shadows.
It is both for me.
And so I have found that rather than describe this journey as a serious of ups and downs, a flow of valleys and mountains rising and falling and soaring and crashing, to unfold the truth of its two extremes and how they more accurately (in my own experiences) overlap and intersect like growing vines, thus making this calling a beautiful one that is also the hardest thing I have ever done and presume will ever do in this life of mine.  I love it.  And it’s hard. And that’s where where I am at these days.
When alfie was about a month and a half old andrew and I decided to have someone come by the house a few hours a week to help give me some mama time.  The constant giving and giving as a mother to three small children at home was really catching up with me and as a result, I was starting to neglect myself.  Everything was in order, put in its place, all the bubs bathed and fed and swaddled and more. All except for me…I just didn’t seem to make it that far in the day.  Sure a long uninterrupted shower would have been nice, and I did take those when given the chance, but this was more than just me needing to get a good lather in whist in solitude.
I started to feel that what was most in need of nourishment was my inner self, my soul and who I was as a woman detached from my role as a mother, so I could be a better mother. Because one has to come before the other.  It just so happens that when I took a good hard look in the mirror I saw a mom who looked like she could use a real break and some uplifting. After sharing this with Andrew, we both decided I was in need of a little reprieve every now and again to really start to find myself and connect to my emotions and with my body in a healthy way.  After all, my pregnancy had been pretty rough on me and now my body was still healing from delivery.  The selflessness in creating and caring for anther human so intimately requires an enormous amount of energy, on mental and physical and emotional levels.  It was time I make time to fit in things just for me.

Yoga a few times a week, some time to rest without a baby within arms reach, to read, to take a walk by myself.  Things that nurture and heal.  And so with our plan, we had the most wonderful helper come and I was jolted at how hard it was to let go of control and give up my domain as mother hen in our home.  Surprisingly, I was flooded with a whole new set of emotions, ones dealing in shame and felt like defeat, on top of already feeling overwhelmed and a little lost.  The perfect self I was striving to be was unable to accept that I was hardwired for failure, just like everyone else that is and ever was.  Us flawed, broken humans, we make things so complicated don’t we?  I know i do.  I tend to get so caught up in my own head that I miss the target altogether and create a world that is impossible to live in.  I needed a hefty dose of reality and I needed to get grounded, and fast, so I talked with family and friends and watch probably too many Brene Brown videos and relentless TED talks and read story after story of mamas just like me, who were feeling similarly in needed help to get out of their rut, but felt shame in doing so.In time, I dug deep and I asked myself, who was this woman in the depths of her being, deeper than those roots of hers that gripped into and gnarled around her identity and role as a mother?  How was she really?  Was she okay?

And you know, she was, but she needed a damn pep talk.

A little, hey there, you beautiful imperfect human, you.  And then what she needed was a sincere hug and to be praised boldly and confidently, to let her know she was kicking ass.  That she was doing one heck of a job and that by taking some time for herself, she was not neglecting her babies.  That she was not letting anyone down, no no no.  Nor was her needing help and time to regain a sense of identity outside of her role in motherhood a sign of weakness, but rather a declaration of integrity, self-respect, and strength.  That she need not feel guilty for tending to her personal needs, even if that need be sitting on the toilet in silence or taking a therapeutic drive to the country or going grocery shipping alone.  And that taking time to repair and mend her wounds and find herself would be beneficial for everyone in the family.  For getting help no a selfish act, rather, it’s the opposite.

I needed not hush this truth across the room in tones that threw shame like piercing darts, but instead, shout it loudly and clearly for her to hear so that it may rattle the very marrow of her bones, sending her to a place where she feels comfort and peace in knowing that she’s making the right choices in celebrating herself again. Not just as a woman who mothers babies.  But first, and foremost, as a woman.

So i did.  Not once.  But many times.  And each day, I am doing so over and over again, until I believe it without hesitation, until I practice what I preach, casting shame aside and declaring myself strong and courageous for standing up for myself.  Such is my story, my current season in life with three.

Oh, how joyful this struggle, or rather how much of a struggle this joy is.  Regardless, I am thankful for it.